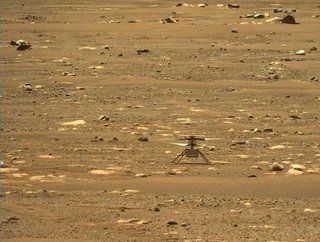 The extreme distance of Mars from the Earth means real-time communication is impossible, therefore autonomous drones such as Ingenuity are the only opti...

We’ve recently witnessed a spate of companies developing autonomous drone technologies for use in everything from shopping delivery to human transportation.

One such example is Volocopter, which last month raised $240mn for its pursuit of urban autonomous taxis. It may be on Mars, however, that the technology realises its full potential, as the launch of NASA’s Ingenuity drone, part of its Perseverance mission, attests.

The extreme distance of Mars from the Earth means anything approaching real-time communication is impossible (as anyone who has watched The Martian will appreciate). Therefore, the only solution available is letting the drone react to conditions on Mars autonomously.

“We take risks other missions cannot”

MiMi Aung, Ingenuity Mars Helicopter Project Manager at NASA's Jet Propulsion Laboratory, said: “Ingenuity is a technology experiment. As such, our plan is to push the envelope and learn by doing. We take risks that other missions cannot, weighing each step carefully.”

By the time you’re reading this, Ingenuity’s maiden voyage should already have happened, although data on whether the experiment was a success will only reach earth around 10:30 GMT.

Don’t expect anything too Marsshaking for Ingenuity’s first flight, with the simple tests involving take off, a 20-30 second hovering period, and landing. Assuming this first step is a success, Ingenuity is set for a series of test flights over the next 30 Martian days, each of which are 37 minutes longer than here on Earth.

“Our team considers Monday’s attempted first flight like a rocket launch: We’re doing everything we can to make it a success, but we also know that we may have to scrub and try again,” continued Aung. “In engineering, there is always uncertainty, but this is what makes working on advanced technology so exciting and rewarding. We have to continually innovate and develop solutions to new challenges. And we get to try things others have only dreamed of.”