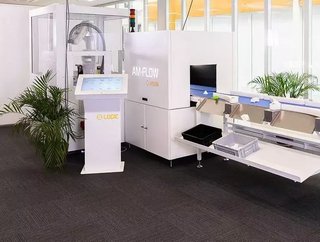 Among the broad range of emerging technologies, few are more potentially revolutionary than 3D printing and artificial intelligence.

Dutch industrial automation company AM-Flow has combined the two with its AM-Flow production-line hardware, which is intended to combat challenges of 3D printing production lines. One such challenge stems from 3D printers strengths, namely being able to produce shapes of infinite geometries - meaning they can be difficult to identify, sort and package.

The company’s solution packages computer vision and robotics to improve the speed and efficiency of dealing with these challenges.

Such steps are vital to overcome for the fully automated, so-called “lights out” factories which are such a crucial part of the next generation of manufacturing as part of Industry 4.0.

In a press release, CEO Stefan Rink said: “We have a team that is passionate about enabling Additive Manufacturing to live up to its sustainability promise: local, distributed manufacturing. To drive further adoption of Additive Manufacturing, the industry must get to competitive price and quality levels per part, and shift her focus from the 3D-printer to the AM Factory.”

“The success of scaling Additive Manufacturing as part of an end-to-end digital platform is not just dependant on continued innovation of the printing process itself, but also on whether we’ll be able to handle the high variety of printed components in a cost-efficient way”, said Bart Van der Schueren, CTO at Materialise. “That’s why we are excited by AM-Flow’s product portfolio, which creates a path towards cost-efficient scaling of the handling process”.