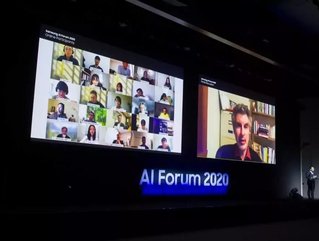 Earlier this month, Samsung hosted its annual AI Forum, which saw experts gather to discuss advancements in AI and shape the future of the technology...

Earlier this month, Samsung hosted its annual AI Forum, which saw experts gather to discuss advancements in AI and shape the future of the technology.

Of course, this year the gathering was virtual. Nevertheless, company executives and leading academics, including representatives from Google, Microsoft and Stanford University, offered their opinions on the next phase of AI development.

One topic of discussion was the best method of approaching human-level intelligence with AI. Dr. Inyup Kang, President of Samsung Electronics, System LSI, said of persevering with neural networks versus new algorithms: “We have to try both. Given the scale of human synapses, I doubt that we can achieve the human level of intelligibility using just current technologies. Eventually we will get there, but we definitely need new algorithms, too.”

Professor Yann LeCun of New York University thought that discussion was premature however, believing that a more realistic near future goal would be a machine with a level of intelligence similar to a cat.

Another topic that increasingly captures the public imagination is the ethics of AI, and the presence of biases within the algorithms that dictate our lives. One method of overcoming that is to legislate for diversity at the design stage, as Dr Jennifer Wortman Vaughan of Microsoft Research said: “I would like to see regulation around processes for people to follow when designing machine learning systems rather than trying to make everyone meet the same outcomes.”

Also a threat is the presence of manipulated data, with algorithms only being as good as the information that is fed into them. “As AI technology continues to develop, it is important that we stay vigilant about the potential for manipulation and work to solve the issues of any AI systems’ inadvertent data manipulations,” explained Professor Subbarao Kambhampati of Arizona State University.