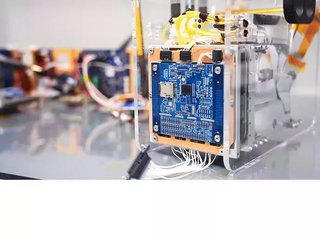 American semiconductor giant Intel and the European Space Agency have launched what Intel calls the first “AI satellite” into space...

American semiconductor giant Intel and the European Space Agency have launched what Intel calls the first “AI satellite” into space.

The launch, which took place on 2 September, saw the experimental PhiSat-1 ejected from a rocket alongside 45 other small satellites.

PhiSat-1 is one of a pair of satellites intended to monitor polar ice and soil moisture, as well as test communication between satellites for a planned future network.

The satellite contains a thermal camera and, crucially, onboard AI processing capabilities thanks to an Intel Movidius Myriad 2 Vision Processing Unit. The processor will use AI techniques to improve imagery and reduce bandwidth by discarding “cloudy” images, as Gianluca Furano, data systems and onboard computing lead at the European Space Agency, explained in a press release.

“The capability that sensors have to produce data increases by a factor of 100 every generation, while our capabilities to download data are increasing, but only by a factor of three, four, five per generation. And artificial intelligence at the edge came to rescue us, the cavalry in the Western movie.”

Satellites in space are blasted with radiation outside of the protection of the Earth’s atmosphere, but Intel’s chip passed testing in its unaltered form.

Future uses for AI-enhanced satellites might include swapping out networks in a “satellite-as-a-service” model, as Jonathan Byrne, head of the Intel Movidius technology office explained: ““Rather than having dedicated hardware in a satellite that does one thing, it’s possible to switch networks in and out.”

Small satellites are very much in vogue thanks to the decrease in costs to orbit achieved by companies such as SpaceX. SpaceX itself is building a constellation known as Starlink in batches of 60, with the end-goal of 30,000 satellites providing satellite internet access globally.